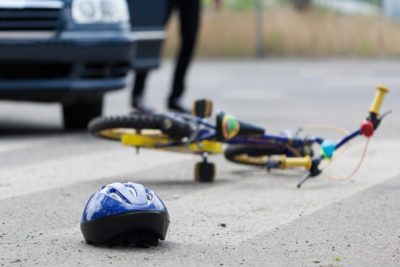 There are thousands and thousands of car versus bicycle accidents each year.  Bicyclists are at increased danger due to their lack of protection against other vehicles.  Many times the rider may be knocked unconscious.  Too many times, we have seen that the version told to the police by the driver of the vehicle is vastly different than what actually happened once a thorough investigation is completed.  If you are being told that it was your fault but you know better, it doesn’t hurt to call for a free consultation.

What if the cop said I was at fault?

What is worse is sometimes the other vehicle driver will not even stop, or (if they do) will insist on not calling the police given the minimal damage to their vehicle caused by a bicycle.  You should always insist upon calling the police and if the other driver won’t wait, simply let the police know.  If you can, use your cell phone to snap a photo of the vehicle, the driver, and the license plate, as well as any other information they may be willing to share prior to leaving.  If there are witnesses on the scene, get their names and contact information, as well.

There are two types of bike vs. car accidents that are more common than any other:

Other situations can pop up, such as vehicle doors opening into a cyclist’s path, or rear-ending situations. Whatever the case and however severe, they should be taken seriously.  No matter how mild you think it might be, we recommend calling the police. If a police report is filed based on information gathered at the scene, the story shouldn’t change later on if you need to submit an insurance claim.  If it really was minimal, and you don’t need to report anything significant then you have only lost the small amount of time waiting for the police to make the report.

As with vehicle-on-vehicle accidents, don’t admit fault and don’t minimize your injuries. There’s no reason to and oftentimes you are in shock from the initial incident, especially if you injured your head from striking it directly or from a concussion from the sudden forces of the crash.

Victims of bicycle accidents have legal rights, just like victims of auto accidents. If someone else is at fault for the accident, you have the right to be able to secure compensation for your injuries, lost wages, loss of ability to earn money, medical bills, future medical costs, property damage losses, expenses not covered by insurance, and damages for pain, suffering and lost capacity for the enjoyment of life due to permanent injuries.  If the injured individual is married, their spouse may also recover for the loss of support and consortium of their injured partner.

What should I do if I have been in a bicycle crash?

It is important to get immediate medical care after a bicycle accident. It is equally important to seek an attorney as soon as possible to discuss your legal options. Oftentimes a scene investigation will help to reveal gouge marks or tire marks, where the accident can be reconstructed and the truth determined.  You should always meet an attorney before accepting any settlement offer from an insurance company. Without assistance from an experienced attorney, the insurance company may try to pressure you into accepting a lower settlement than you deserve or you may be led to believe you have no rights to compensation at all.

If you are a bicycle accident victim please call us for immediate assistance.